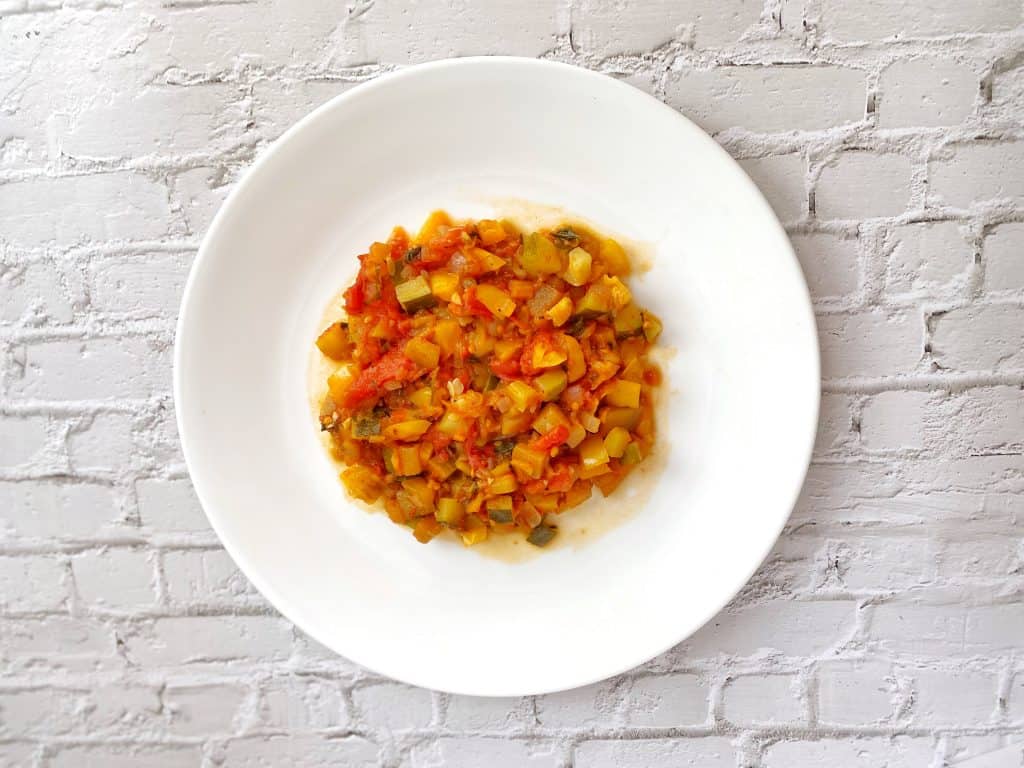 This Level 6: Soft & Bite-Size Spanish-Inspired Ratatouille will be a crowd pleaser! It fits perfectly into a dysphagia diet, but everyone at your party will love it! 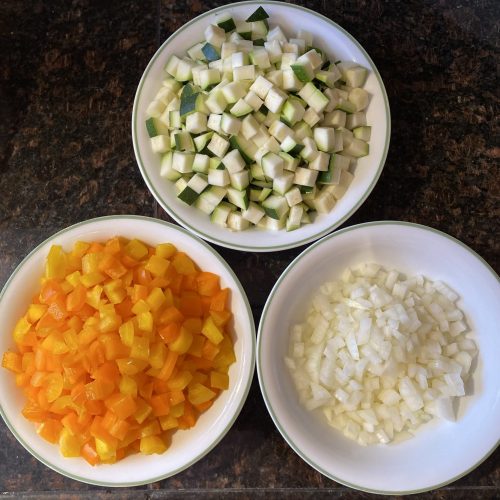 Before my senior year of college, I studied abroad in Spain for four months. I had done a lot of research prior to leaving, but I truly wasn’t expecting everything Southern Spain had to offer. I lived in Sevilla, which is the capital of Andalucia. I ate my way through Spanish cuisine (and gained thirty pounds in the process), eating everything from salmorejo, to espinacas con garbanzo, to jamon iberico by the pound.

When I was there, I stayed with a host family who welcomed me with open arms. My host dad, Marcos, was the most amazing cook. They had a tiny kitchen, but the food had the biggest and boldest flavor you could imagine. I still think about his cooking to this day, years after I left. This recipe is based on something he made frequently called pisto.

Pisto is more commonly known in the United States as ratatouille. However, I somewhat combined the two ideas to create my own version. This recipe may seem daunting at first because of the long cook time, but a majority of that time is inactive and you can focus on other things.

One of the most important things to ensure is that you let the eggplant rest. It’s so important to peel and chop the eggplant and then let it sit in a colander with salt. This will help the eggplant to release some of its bitterness when you’re cooking it.

For the soft and bite sized version of this recipe, make sure you’re chopping the vegetables into 1 ½ cm pieces. This will be a time-consuming process, but it’s easier to do it before the vegetables are cooked. It’s essentially impossible to do after the fact. 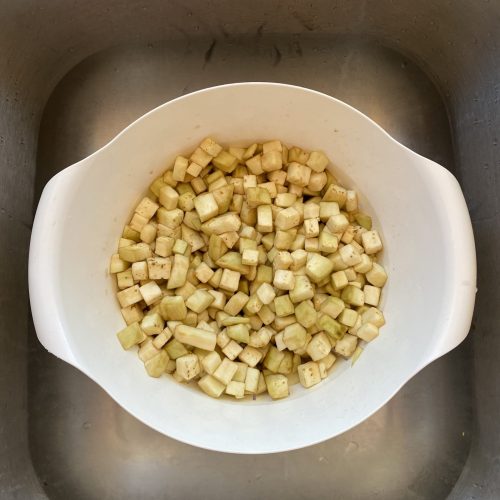 Food pieces can be no larger than 15mm square for adults or 8mm square for children. Foods must have no separate thin liquid, but should be soft and moist. The pressure from a fork or spoon must be able to mash the pieces easily; this is called the Fork Pressure or Spoon Pressure Test. In these tests, the utensil must be able to easily cut through or break apart the food using only the side of the utensil. When mashing the sample to test, only use as much pressure as causes your thumbnail or fingernail to blanche white. After mashing, the food must not return to its original shape. We recommend watching IDDSI’s Youtube video of the Fork Pressure and Spoon Pressure Test before you cook as well as during the testing of your final modified portion.

When I eat this, I finish it with a soft baked egg, manchego cheese, and parsley. There’s absolutely no reason you couldn’t add this into your finished product! Just make sure that everything is the appropriate size for this diet. The egg yolk would give a level of velvety-ness, and the manchego would give a nice saltiness to finish. If you’re vegan, feel free to leave it out! The finished recipe doesn’t call for it, but just know that it’s a wonderful option. 🙂

I hope you eat this pisto/ratatouille and pretend you’re basking in the sweltering, Southern Spain heat. I hope you feel comforted and wholesome, just like I do every time I eat this recipe.

If you have any questions or comments about this recipe, please comment below!

If you loved this recipe, check out our other Level 6: Soft & Bite-Sized, or learn more about us! 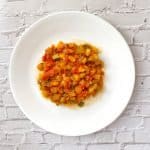 This Level 6: Soft & Bite-Sized Spanish-Inspired Ratatouille will be a crowd pleaser! It fits perfectly into a dysphagia diet, but everyone at your party will love it!
Prep Time30 mins
Cook Time1 hr 30 mins
Course: Main Course
Cuisine: Spanish
Keyword: Soft & Bite-Sized
Servings: 4

Support us on Ko-fi